A typical Friday night out in Minas Gerais.

Simple hardware store zip guns seized by police in Kazakhstan. With this design a finger is used to flip the bolt out of its slot to fire, in place of a typical trigger. Nail gun blank power charges combined with an airgun pellet serve as an improvised ammunition substitute.

Some tools of the trade.

Originally a long gun locally produced for hunters, It has been modified or ‘sawn off’ into a pistol which was used in a bank robbery. A large extension spring powers the hammer which is part of a typical simple exterior lock set up. A toy cap would typically be used to prime the nipple combined, the propellant usually being black powder taken from fireworks. 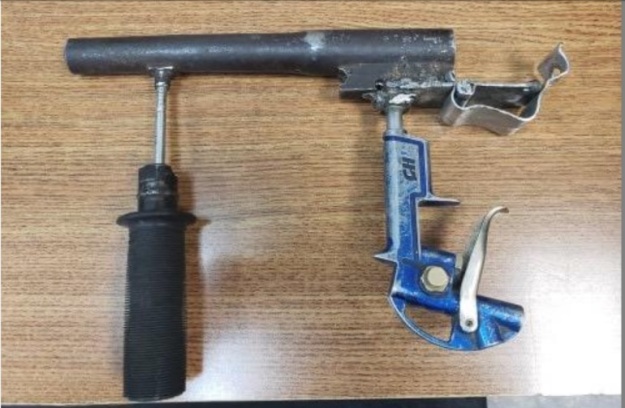 “Police recovered what appeared to be a homemade hand gun which Manitoba First Nations Police say the suspect pulled from the waist band of his pants. Police say a 25-year-old male is in custody and has been charged with possession of a weapon dangerous to the public, resisting arrest, failing to comply with court order and possession of a controlled substance.”

Someone actually kept this thing down their pants.